Shearwater is a town on the north-west coast of Tasmania, Australia. It lies on the Rubicon Rivulet, just off Bass Strait, 20 km east of Devonport. The town of Port Sorell and Hawley Beach neighbour Shearwater. Shearwater has a population of just under 2000 which grows considerably during the holiday season. It is part of the Municipality of Latrobe.

Shearwater is one of many popular holiday resorts along the north coast of Tasmania. In recent years the population has swelled and become one of the fastest growing areas in Tasmania; mainly due to affordable real estate and large developments in the area, including a shopping centre, the Port Sorell Golf Club, and the Shearwater Country Club resort. 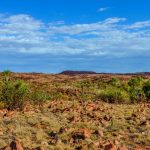