Port Fairy is a coastal town in the Moyne Shire of Victoria, Australia. It is located on the Princes Highway 28 km west of Warrnambool and 290 km west of Melbourne where the Moyne River enters the Southern Ocean.

Port Fairy has an approximate population of 2,700. Its primary industries are tourism and fishing, and it is the home port for one of Victoria’s largest fishing fleets. It contains 50 buildings protected by the National Trust of Australia. The adjoining Griffiths Island holds a breeding colony of the Short-tailed Shearwater or Australian Muttonbird.

The Port Fairy Folk Festival is held in March each year. Port Fairy also has a highly rated golf course.

By the 1920s the area was known as Port Fairy, believed to be named after Captain James Wishart’s cutter The Fairy. 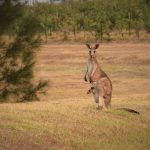