Bruce Rock is a town located in the Eastern Wheatbelt region of Western Australia, approximately 243 kilometres (151 mi) east of Perth and 48 kilometres (30 mi) southwest of Merredin. It is the main town in the Shire of Bruce Rock.

The town got its name from a low granite outcrop which lies to the east of the town and which was named after a sandalwood cutter named John Rufus Bruce who set up his camp near a soak at the base of the rock. The rock is signposted to the east of the town (cross over the railway line and take the Bruce Rock Road until you see signs to the north).

At the rock there is a sign which reads: ‘This marks the camp site of John Rufus Bruce after whom Bruce Rock was named. The small soak was originally a native soak possibly centuries old. The deep well is a good example of the method used in stoning wells in the early 1900s by the Public Works Department.’ There are actually two wells at the site. The important historic site is the rectangular shaped well not the rounded one.

The area was explored in 1836 by John Septimus Roe but like most of the wheatbelt it was not settled until after 1900 with land being released for agriculture in 1908. In the intervening years the only people in the area were pastoralists with large leaseholdings who grazed sheep and the occasional sandalwood cutter such as John Rufus Bruce.

Bruce Rock is the centre of an area which, unlike most wheatbelt areas, has a number of genuinely very interesting sights and places to visit. There’s the tiny bank at Shackleton and the superb Kokerbin Rock which is surely the equal to the more famous Wave Rock near Hyden. 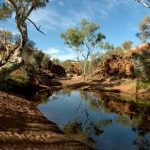